Want to know the fastest and easiest way to alienate your staff and make them feel unappreciated and disgruntled? Act like you’re better than them.

So here’s New Camp Director Pro Tip #4. Don’t do that. Or in other words, stay out of the ivory tower.

You’re in a position of authority, others look to you for advice and guidance now – awesome! That’s a pretty important role you have there but that doesn’t mean you can’t get your hands dirty sometimes too. Staff need to know that you respect them and one way to show them that is to work with them and not just shout orders from your throne (or desk, or lawn chair, or wherever else you might plunk yourself).

Make it a rule never to ask your staff to do something that you wouldn’t do yourself.

This is pretty common leadership advice, and there’s a reason for that, it’s true! I’m going to take it one step further though, jump in and do (or at least help with) the really terrible jobs yourself.
At least once a summer I find myself going through my camp’s dumpster looking for something important that someone accidentally threw away. Last summer it only took looking through 7 garbage bags to find the adapted spoon that a camper brought with them to camp (see how I said “only” like it was no big deal?) the bad news is that my kitchen hasn’t exactly embraced composting yet, so there was a lot of food waste in the bags, but the good news is that my ACD is wonderful and she always volunteers to help me sift through the garbage. Team building! (Bonding through misery!)
I have never had to ask her, I never would because it’s gross and way less fun than I make it sound, just like I’d never ask the staff who accidentally threw it out to climb into our industrial dumpster and dig it out, but my ACD is a leader and she shares my belief that leaders take on the hardest/ yuckiest jobs to spare their staff. 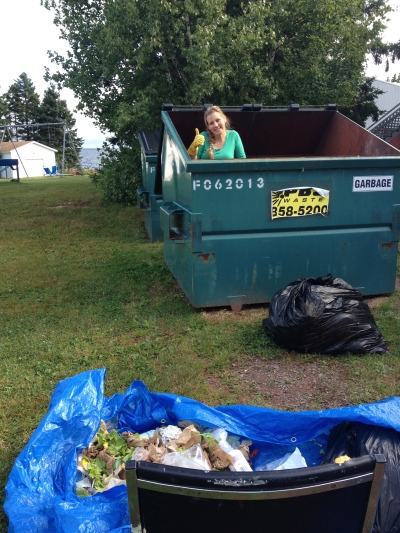 Now I’m not suggesting that you do everything for them – that’s not a good system at all! You still have your own job to do, and micromanaging is not a great leadership path.

For example, I work at a small camp, so small in fact, that we do our own cleaning. On the last day of every session, the staff clean out all of the cabins, sweep and mop the dining hall, clean the bathrooms, etc. before we can leave for our break. (Just in case you’re wondering, these things are being done on a daily basis too… not just on the last day)
I don’t help clean on the last day, because I’ve got a million other things I need to get done before we can all leave site. But it’s ok that I’m not cleaning toilets with my staff on the last day of the session, because they know it’s something I’ve done a million times before and will do again, and they also know that if I use my time better, they’ll benefit by getting to leave for break sooner.

Not only is it a poor use of your time to try to do all the hard jobs (letting your job fall to the wayside because you’re busy doing someone else’s isn’t the answer) but it doesn’t help your staff in the long run.

Sometimes we have difficult campers. I know, shocking right!? Sometimes they need some one on one time to be ok. In the past, I’ve stepped in to provide that one on one care so that my counsellors can have a break, and focus on the their other campers. They have always appreciated that.

The problem arises though when a member of the leadership staff is stepping in all the time to care for those campers. Their work starts to pile up, they get exhausted (because it’s hard to do 2 jobs!), AND most importantly the counsellors aren’t learning anything.

It’s awesome to step in and give the staff a little break sometimes, but unless you’re giving them tools to deal with this in the future and teaching them skills for situations like this – they’re never going to be able to deal with that challenging camper.  Support and encourage them, teach them the tactics that you use, let them see how you deal with the situation, then be around if they need your help. Coach them. And from time to time – hand them a Kit Kat bar and take over for them. (If that last sentence makes no sense to you, see my post Supporting Your Staff – Take a Break) 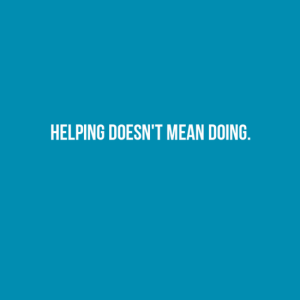 Let them see you work

My first summer directing a new camp was challenging. I had come from a camp full of people who knew me, they knew my work ethic, they knew my personality, they trusted me.
I went to a camp that needed a serious culture shift, fast. I had to make some hard calls and cut some “traditions” to make sure that the campers were being cared for in a way their parents and our organization expected.
Some returning staff had a big problem with that. There were lots of conversations about those decisions that summer. But those conversations aren’t the ones that stuck with me the most. A conversation I had with a new counsellor is what had the biggest impact on me, and my relationship to the staff.

He came to me and told me that he thought it was unfair that the counsellors had to do chores every night but that I wasn’t on the schedule. Did I think I was better than them? This shocked me. I had never in my career had a staff suggest that I thought I was better than them, I had always made a point of pitching in and doing what I could to make their lives easier. And then it hit me. They didn’t know me, and they weren’t SEEING me help with chores.

I never put myself on the chore schedule, because inevitably I’ll get called away and someone else will be left holding the bag, plus we have our team meeting in the evening so it just doesn’t make sense to double book myself. But what they didn’t know (or see) is that every day (well, almost every day) I would sweep through the main building, or I would clean out the bathrooms, I would pitch in with laundry or help with dishes in the kitchen. But they weren’t seeing those things because they were outside with their campers, so their perception was that I thought I was too important to help keep the camp clean.
I explained to that counsellor that I did help with chores, I was just on a different schedule than them. That conversation opened my eyes to my relationship with my new staff and how important perception vs. reality is.

Have you ever had staff wonder what you’re doing in your office? Ever had them give you strange looks while you’re doing your daily perimeter walk? Talk to them about it, be open about your job, teach them what’s involved in being a member of the leadership team. Invite them to join you on a perimeter walk, explain to them why you do it and what you look for. If they ask how your day is, tell them!
Don’t complain about it being hard or how busy you are, but let them in on what it is that you do, “my day’s been great so far, I have the camper lists ready for next week, checked in with a bunch of parents, had a meeting with the support staff AND got to play a game of soccer baseball! How was your day?” Not only does it help them see that you’re not sitting in an ivory tower, but that insight might help them decide if they eventually want to move into a leadership position.

What do you think? Should leaders pitch in and help with the ‘dirty jobs’ or is an ‘ivory tower’ one of the perks of promotion? Tell me about it in the comment section below.  Did you ever have a leader who refused to get their hands dirty, how did that impact the team dynamic?

Join me on Goodreads

A Blast From The Past – The Archives

Look for posts in specific categories